E-hryvnia: What is it And Why Does it Matter 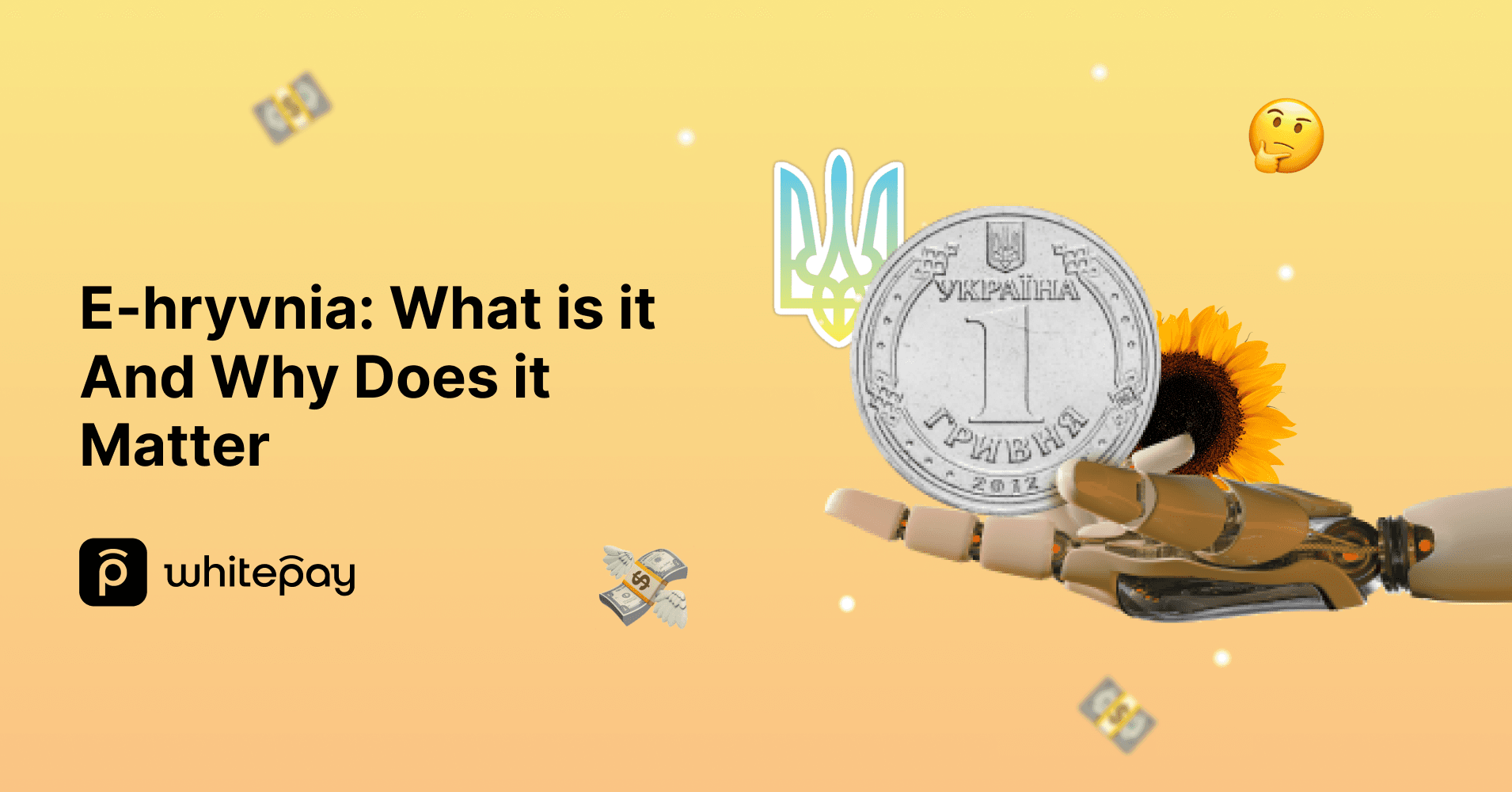 What is e-hryvnia, blockchain, and how can business owners integrate cryptocurrency today? Find out together with Whitepay.

The National Bank of Ukraine presented an updated project for the e-hryvnia, a digital currency that has been under development since 2018. Participants of the payment and virtual assets markets had the opportunity to familiarize themselves with the updated concept of the e-hryvnia and share their comments and suggestions.

Ukraine is one of the first European countries to consider creating a digital currency and integrating it into its economy. The National Bank of Ukraine has already begun developing and testing e-hryvnia, which individuals and businesses can use.

The e-hryvnia is a digital currency issued by the National Bank of Ukraine. This new form of money will be available to consumers through electronic online wallets. But it will not replace cash or electronic money in everyday transactions.

As mentioned above, e-hryvnia is a CBDC (Central Bank Digital Currency), an experimental project for the world economy. Such assets are being developed by 98 countries, including China, which recently launched a digital yuan (e-CNY).

So what is the difference between the ordinary electronic money you can see in your bank account and e-hryvnia?

Blockchain technology is the main difference between e-hryvnia and electronic money, as stated by former NBU head Yakov Smolii. This is what unites Ukrainian digital monetary units with cryptocurrencies.

Blockchain is a distributed ledger technology originally developed as the accounting method for the first cryptocurrency, Bitcoin. It is based on a chain of blocks, each containing information.

A blockchain differs from a regular database in that its records are immutable. Every block contains data about itself and information about all previous blocks. Such data cannot be changed or falsified without affecting the entire chain, which is impossible due to another feature. Blockchain is located simultaneously on the computers of all network participants and not on a single central server. Thus, it is theoretically possible to falsify information in one block, but the initial data will still be in all previous ones.

Blockchain technology is an open-source, decentralized ledger system that is not well-suited for government regulation. This is why cryptocurrencies are so popular and why we love them. E-hryvnia, on the other hand, is entirely centralized.

It is expected that the e-hryvnia and its blockchain will be stored on different servers of the NBU to protect them against data falsification. However, another important function is planned to be implemented in e-hryvnias.

Smart contracts are computer code built into the blockchain in which contract terms have been written. For example, if Company A pays Company B 5,000 UAH, then Company B will ship 1 ton of grain to Company A. When the condition is met, the smart contract will automatically create a request for grain shipment. This way, crypto hryvnia will enable programming payroll and making regular payments.

Is the electronic hryvnia Ukraine's version of Bitcoin?

The blockchain is optional for the functioning of central bank digital currencies. The e-hryvnia, for its part, will not be a cryptocurrency. Let's compare.

Cryptocurrencies were designed to be independent of any governing body. In contrast, the e-hryvnia is tied tightly to the state and can only be purchased at a government-run exchange.

Bitcoin was created as an alternative to traditional currencies with its own ideological basis. The Ukrainian digital currency, for its part, will be an innovative addition to the already existing monetary unit, not the national equivalent of Bitcoin.

What will be the e-hryvnia's exchange rate?

The e-hryvnia will be traded at the national currency's exchange rate.

The cryptocurrency market already has a number of digital assets with similar functionality. These are called stablecoins. The most prominent example is Tether, whose value is always pegged to the US dollar. Thus, 1 USDT is always equal to $1. However, stablecoins are issued by private companies that may face reputational issues.

In general, cryptocurrency is very sensitive to the media. CBDC can be a more stable alternative.

What are the main functions of the e-hryvnia?

CBDC is expected to contribute to the development of payment infrastructure and accelerate the digitalization of the Ukrainian economy.

What are the economic benefits of e-hryvnia?

The purpose of the e-hryvnia is to ensure economic stability by making payments transparent and increasing confidence in the national currency.

The development of a CBDC indicates that cryptos are becoming more widely accepted in Ukrainian financial markets. Some companies already provide the opportunity to settle digital assets with the help of Whitepay.

Whitepay is an online platform that helps merchants accept cryptocurrency payments for their goods and services in online stores and physical locations.

Among the most relevant tools, the service provides the ability to accept crypto donations. According to Slowmist, Ukraine received donations of more than $100 million in digital assets.

Ukrainian digital currency is expected to:

Although we cannot say for certain when CBDCs will become something common, Ukrainian businesses can already reap the benefits of cryptocurrencies by joining Whitepay today. All you need to do is send a request, and our team will accompany you at all stages of integrating crypto payments into your business.

The benefits that you will receive include the following:

Your clients will be able immediately to settle their invoices with digital assets without converting them into hryvnias.

The advantages of e-hryvnia for individuals

First, it is an opportunity to safely and securely store money in electronic wallets. And if the electronic hryvnia is traded on crypto markets, users can invest directly into digital assets without any obstacles.

Given the transparency and security of transactions in the e-hryvnia network, data on currency flows can become a strong argument when defending one's rights in court.

Where you'll be able to pay in e-hryvnia

With the NBU's declaration that e-hryvnia is an additional form of monetary payment, Ukrainians could use the digital currency at points of sale and pay for offline and online services.

The pilot project launched in 2018. Using the Prostir payment system for testing, it was then that National Bank issued 5,000 digital hryvnias.

Later, in 2021 Taxombank conducted a study of the Ukrainian digital currency with two American fintech companies: Bitt and Stellar Development Foundation. It has been announced that the next stage in creating a digital currency for Ukraine will be testing it on Stellar's platform, which offers a ready-made infrastructure.

Economic prospects of the e-hryvnia

Central Bank Digital Currencies reflect a desire by government authorities to tap into the lucrative financial technology sector because you can use cryptocurrency to earn money from fluctuations in exchange rates and pay for goods or services.

The electronic hryvnia is a blockchain analog of the Ukrainian currency. CBDC will likely become commonplace for Ukrainians, given the increasing digitization of the economy. However, it is too early to say exactly when the e-hryvnia will take its place on the market because the draft law is still developing.

Express payments via Whitepay and WhiteBIT. How does it work?